Unilever is likely to sell its tea portfolio. The $3 billion division is under strategic review by the CEO who explained to investors the “harsh reality” that declining black tea sales in developing countries, compounded by slowing growth in India, China and Latin America is too great a drag on profits.

“We’ve had a lot of good effort at getting the core black tea back to growth, but we just don’t see it happening,” Unilever CEO Alan Jope told analysts during the company’s quarterly earnings call on January 30. Jope, who ascended to the job of CEO in January 2019, projected sales of 3-5%. Instead, sales in the company’s foods & refreshment portfolio grew 1.5% with volumes down 0.2%.

“Two-thirds of our tea business remains core black tea, which is declining. And we have really seen this trend play out – it’s a long-term trend, over a decade. We’ve had a lot of good effort at getting the core black tea back to growth, but we just don’t see it happening,” he told analysts during the earnings call.

Tea remains a growth category globally with projections of $73 billion in sales by 2024, but sales growth in the packaged segment in developing countries is not enough to offset declines in Europe and the Americas. Jope noted that growth rates and overall sales of Unilever’s “Red Label” Brooke Bond brand remains strong in India and that Pukka saw “decent growth.”

“Insanity is carrying on doing the same thing and looking for different outcomes,” he told the Financial Times. “For 10 years we have been trying to ignite growth into our tea business unsuccessfully, so today we are initiating a strategic review,” said Jope

No decisions have been made, he told analysts. There may be different ways of organizing business partnerships, possibly sales of individual brands.

PepsiCo may provide an out. In 1991 Unilever and PepsiCo created the Pepsi Lipton Partnership to manufacture and distribute ready-to-drink (RTD) tea in the U.S. and Canada. This was followed in 2003 by expanding the relationship to other countries through the Pepsi Lipton International (PLI).

The fundamentals in bottled tea are very different than those for tea sold dry. A combination of convenience and health-conscious consumers makes the RTD segment profitable and expanding. RTD leads growth in the U.S. tea market with sales estimated at $10.75 billion, compared to $1.2 billion in dry tea in mass market and convenience outlets.

The world of tea was vertical in 1984, when Unilever acquired Brooke Bond to become the largest tea company. In those days Brooke Bond, founded in Lancashire, England in 1869, owned a third of the United Kingdom’s market with its PG Tips brand; one third of India’s packaged tea sales with its namesake “Red Label” and a sizeable share of North America’s tea market with Red Rose. Massive, corporate-owned plantations in India and Assam and Kenya individually produced millions of kilograms of highly processed tea. The links of the global supply chains were sturdy and tradition-bound with large populations of dependent workers and punctual out-cry auctions in Calcutta. This was a time of order, market stability and control.

Adding the Brooke Bond holdings to Lipton’s fabled Ceylon-based “Yellow Label” known around the world elevated Unilever to the world’s largest tea company. It had taken a generation to acquire Lipton, a process begun in 1938 with the purchase of the U.S. and Canadian business and culminating in 1972. 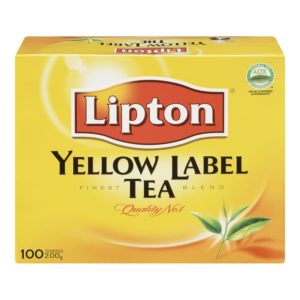 Lipton’s vision was to eliminate the middleman, his slogan: “Direct from the tea gardens to the teapot.”

Today plantations are failing, workers are the most expensive cost and consumers are split in their preferences. Smallholders grow the best tea and are learning to market tea direct. Herbals and functional tea blends are more popular than traditional teas.

Those who view tea as a cheap beverage want to pay no more than a penny or two per cup. Those who want the convenience of bottled teas pay 50-cents per serving. Those who value the qualities of loose leaf are willing to pay $1 per cup.