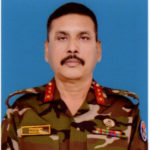 He was born in a noble Muslim family on 22 July 1964 in Kustia, Bangladesh. He was commissioned from Bangladesh Military Academy on 22 December 1989 in Electrical and Mechanical (EME) Engineers Corps. Major General Shohail obtained his graduation on  Electrical and Electronic Engg (EEE) from Bangladesh University of Engg and Technology (BUET) in the year 1988 and ‘Masters of Engg on Advanced Engineering Management’ in the year 2012 from the same university.

He has attended several professional courses at home and abroad. He obtained Masters Degree on Defense Studies from National University of Bangladesh on 2002 and completed Staff Course from Defense Services Command and Staff College, Mirpur, Bangladesh.

He has served in command, staff and instructional appointments of Bangladesh Army. He served as the Commandant of EME Centre and School, Dean, Faculty of Electrical & Computer Engineering (FECE) and Director (R & D) MIST, Dhaka, Director (Planning and Maintenance) of Bangladesh Ordnance Factories, Gazipur. He served as Commander EME of HQ 9 Infantry Division. He also worked as Officer Commanding of Field Workshop Companies. As an Instructor he served at EME Center and School and Military Institute of Science and Technology (MIST), Dhaka.

He served as Chief Engineer ( Mechanical and Electrical) from 2008 to 2011 at Mongla Port Authorities.  He also served as Director General, Department of Immigration & Passports (DIP).

Major General Md Shohail Hossain Khan, psc has retained the Army’s reputation as a trained professional officer at home and abroad. He served as Contingent Commander of OKP-3 (Composite EME Company) under the supervision of Kuwait  Army from 1995 to 1998. While working as Chief Engineer at Mongla Port, he completed a project by acquisition of cargo handling equipment at remarkably lower cost than the estimated budget and also planned for procurement of equipment for next 5 years. He also efficiently simplified the complexity of container handling activities and reduced the container handling timing of ships. He also planned for effectively utilization of solar power for port operation and Hiron Point pilot station. He has also left a mark of achievement as Dean, FECE and development of Digital Popup Target and Firing Result (Grouping) auto systems while working at MIST.  As DG DIP, he has huge contribution in visa and passport issuance system.  He has also remarkable contribution for implementation of  ePassport and Automated Boarder Control Management project.

In his personal life, he is married and the proud father of two daughters.