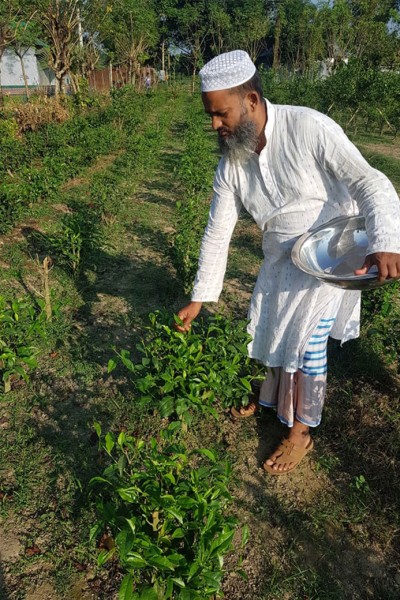 Mymensingh division is not a region known for tea cultivation, but researchers say that might soon change. In fact, Bangladesh Tea Board (BTB) has already initiated tea cultivation in the division.

According to BTB, the region has shown promise for tea farming after several experiments. Trial runs at hilly areas of the district have yielded positive results, said BTB sources.

The authorities are hopeful for a better future and are preparing to acquire land under a programme of Bangladesh Tea Research Institute (BTRI), said project director Dr Mohammad Shamim Al Mamun.

The official said they have identified several areas suitable for growing tea, while cultivated has begun in a few areas.

“Tea cultivation could see a boom in this region. We are thinking of establishing a tea board office in Mymensingh to support local farmers easily market their produce,” said the project director.

During the visit, they did soil-testing to evaluate tea-growing potential of the lands. They said their visits ended with a sense of optimism.

BTRI senior scientific officer (soil) Nayeem Mustafa Ali said both the soil and weather condition of the region is good for tea cultivation.

The BTB has started the initiative to produce more tea to meet the growing demand and if the cultivation target is met, tea production will increase enough to export alongside being marketed locally, according to BTRI director Dr Mohammad Ali.

Though a new development, plans for initiating tea farming in the area go back quite some time. The potentiality for tea cultivation in the country’s northern and hilly areas of Mymensingh region was proposed in the Tea Policy formulated way back in 1984.

BTB later conducted a feasibility study in 2004, while a final study was conducted in 2019, said Dr Ali.

As of now, a total of 13,645 acres have been primarily selected for tea cultivation in Mymensingh region, while another 1,235 acres have been acquired under a five-year project of BTRI. A proposal has recently been submitted to the Ministry of Commerce for approval, the project director said.

PRODUCTION IS LIKELY TO INCREASE

Initially, BTB will facilitate farmers to set up tea gardens on the selected land with necessary financial and technical support.

If the project is implemented smoothly, after five years of planting saplings, around 15 lakh kg ready-tea will be produced from Mymensingh region per year, said project director Dr Mohammad Shamim Al Mamun.

This will generate employment for over 2,000 people, the official said.

The official also hoped that a BTB office and a tea processing mill will be established by early next year, given the project proposal is approved shortly.

Tea cultivation on non-cultivable high lands is cheaper than traditional cultivation, and it more profitable, said the officials. A tea farmer can earn a profit of Tk two to three lakh from just one acre of land but the highest profit from cultivating traditional crops on the same land is around Tk 50,000 to one lakh, they said.

Tea farmer Abul Hashim, of Charipara village in Mymensingh’s Muktagacha, said he started farming on 18-decimal of land about a one-and-a-half years ago.

Hashim said he has already started collecting tender leaves, albeit at a small scale.

“I am sharing my leaves with my friends and relatives, and getting their feedback on the produce,” he farmer told this correspondent.

The 40-year-old also said most the people living in the hilly areas, including Muktagacha and Phulbaria, live below the poverty line. If tea cultivation is started in a large scale, it might help change their lives.